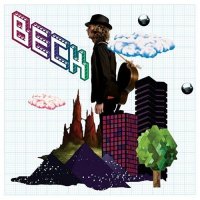 Beck has just pulled off a near-perfect release with his new CD/DVD The Information. First of all, the two-disc set sells for the price of a standard CD release. The DVD includes videos for all 15 tracks. This in itself is unheard of, but compared to the going price of a CD, the DVD is basically free.

The next unusual thing you notice is the cover art, namely that there isn’t any, just a blue grid on white paper. The album features “design-your-own” cover art that can be created using a sheet of stickers. Apparently there are different sets of stickers too. Several people have posted their own versions of the album art on flickr (see the tag theinformation).

The album itself is great as well. In my opinion, it is some of his best work. The style is eclectic as usual, varying from melodic and acoustic (“Strange Apparition”, “Movie Theme”, “Nausea”) to something that might be described as retro-electro-funk (“Cellphone’s Dead”, “Elevator Music”, “10,000 BPM”). There are a couple of relatively weaker tracks, but most of them outstanding.

The included DVD is also extremely well put together. It contains a music video for each track on the CD. The material for the videos was reportedly filmed in studio during the recording sessions. They have a very retro, homemade feel, like some bad music videos from the 80’s when the state of the art was being able to distort colors and overlay five shots at once. The videos are pretty amazing considering that they are low-budget on purpose, and that with the technology available now, it is probably actually harder to make a video with such a retro feel.

The DVD has a very visually interesting but functional interface. Unlike other albums that have additional packaged content, this one gives you the videos and music without all the garbage and fluff. It doesn’t make you install some worthless piece of software to use it and the content to fluff ratio is somewhere near infinity. It seems that Beck has set a new standard for a well-executed album release.